My close friends and family know that I LOVE popcorn!

Despite a bad rap for being an unhealthy snack, popcorn can actually be a pretty good snack choice. It's a whole grain, high in fiber and antioxidants. It has protein and iron and is low in calories.

Quinn Snacks makes a variety of neat flavors of popcorn and they use pure, simple ingredients, non GMO and even tell you where it was farmed!

So far, I've had the pleasure of trying the Super Kale popcorn. It's made with organic dried kale and little carrot too! It's very green in appearance, but don't let that scare you. 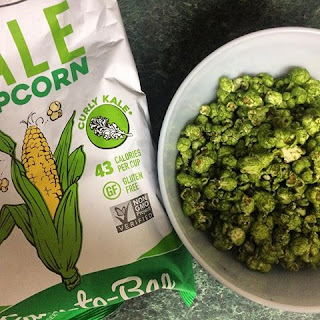 I really enjoyed it. It's a nice savory flavor without being overly spicy or salty. It does taste "green" if that makes any sense. You definitely get a kale vibe without it being overwhelming or bitter. Plus, you just feel healthy for eating it! XD At 43 calories per cup, using simple ingredients, this makes for a great snack in my books!

What's your favorite snack or what is your favorite way to eat popcorn? The varieties and toppings are endless!
Posted by Megan at 7:21 AM No comments:

People wait all year for pumpkin season! I, however, am a strong proponent for year round pumpkin appreciation. Pumpkin also lends itself to great macro-friendly recipes!

Without further ado, I present to you Pumpkin Caramel Protein Snickerdoodles: 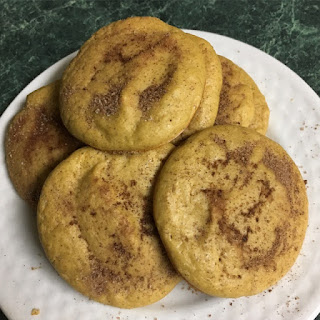 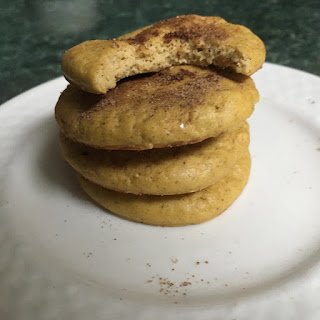 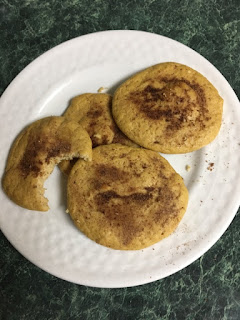 The market for protein bars is simply incredible. I can not keep up with all the new brands, flavors, etc. However, I do love trying new ones often!

I was very excited to try Sourcewell Nutrition protein bars because I've heard good things about them. They state that the whey they use is sourced from grass fed cows. Whey protein from grass fed cows provides beneficial bacteria and broader nutritional benefits versus a grain fed cow. Sourcewell is conscious of the source of protein and ingredients so they use high quality, fresh ingredients. Sounds good so far!

I was able to try the two current flavors of their original bars - Birthday Cake and Cookies and Cream. They are coming out with a Snickerdoodle flavor original bar and Chunky Peanut Butter and Cookie Dough Nature Bars. Those sound great too!

This bar looked very unappealing and slightly smushed but I had a positive attitude and was not disappointed. The flavor was very good, no lemony tang or weird aftertaste just sweet cake flavor. It was also studded with whey crisps which lends to an interesting and appealing texture. Aside from the crisps, the bar was chewy in a taffy-like way but didn't break my jaw. I think I would like to try baking it! 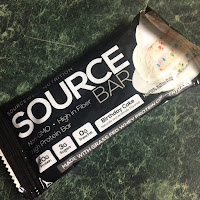 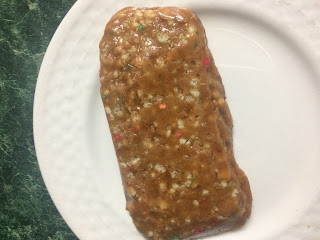 Sadly, I ate this one in a dark car so I don't have any pictures, but it was rather smushed too. Again, it had a great cookies and cream flavor that really tasted like pieces of oreo-type cookies! It also had the chewy/crunchy texture with the whey crisps. They mention in the description that it tastes like dessert when microwaved or baked so I definitely need to try that next time.

Overall, I thought these bars were pretty good. I really like the fact that they identify the source of protein and use high quality ingredients. They are non GMO and high in fiber. I think baking them would really make them better because, though the texture was interesting, it was not the greatest. If you want to give them a try you can order from sourcewellnutrition.com and use code healthyhappyfree for free shipping!

It's goal time! I've been trying to set goals on a regular basis and make a conscious effort to work on them. I'm currently participating in the #slap90days3 "contest" on instagram which is hosted by Slap Nutrition and encourages overcoming your fears to reach your goals.

One of my biggest struggles that I've been trying to work on for a long time is my caffeine consumption. I'm almost embarrassed to admit how much caffeine I would consume on any given day. Not only that, but I was drinking multiple diet sodas and sugar free energy drinks that utilize artificial sweeteners. I don't necessarily think that's detrimental every now and then, but multiple times a day is probably not ideal for the body.

I've been doing pretty well so far, cutting my caffeine intake greatly, increasing my water and I've also found some substitutes that I think taste very good! One of my favorite "soda substitutes" is Zevia. It's zero calorie soda sweetened with stevia. Some flavors have a small amount of caffeine and some don't. My favorite flavors are Ginger Root Beer, Cream Soda, and Dr. Zevia, although I haven't tried them all.

Another drink I've been enjoying in place of energy drinks are the Bai beverages. They are sweetened with erythritol and stevia and are full of antioxidants. They have a small amount of caffeine (45mg per serving) so it's a nice little boost without overdoing it. (Monster ultra has 140mg per can for comparison.) 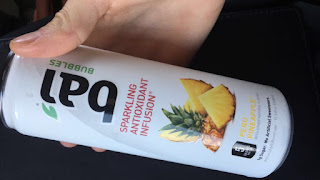 I'll be honest, I'll probably still have days where I turn to a diet soda or zero calorie energy drink - I'm not perfect! However, I am happy that I'm really making progress and it's getting easier to function on less caffeine. The first few days were rough! I'm hoping to continue to wean down my reliance on caffeine!

What are some of your goals for this month? Do you have a caffeine or diet soda addiction like me?
Posted by Megan at 1:33 PM No comments:

Will Run for Bacon!

Another day, another 5k!

Running, though, has been part of my life for many years now, even after many injuries. My most recent injury was a broken pinky toe, so I did take about a week off from running to try to rest it a bit. After I came back, my pace was significantly slower and I've been quite frustrated. I have to remember, though, why I run. I run because I love the feeling after a run. I love feeling like I accomplished something, that I pushed myself, the adrenaline and the endorphins. I love being outside! (Treadmill = dreadmill!)

So, I was a bit apprehensive for this 5k, however, the reason I run is not to win a tiny trophy. Plus, there was free pancakes and bacon at the finish line. 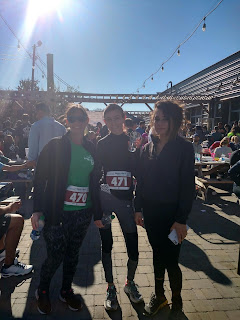 The course was pretty nice - it went through Charlotte, NC starting at Sycamore Brewery. The course had some hills but nothing super extreme. It went on roads and sidewalks. My one complaint is that it was rather crowded at times because there was close to 900 participants and they allowed dogs and strollers! They also used gun time rather than chip time so I subtract a few seconds from my result, lol!

I did have a good time, as always and my pace was better than it has been. It was definitely nowhere near my best, but, hey, you can't PR every time. I'm hoping to PR next year at the China Grove 5k but no pressure!

I actually finished 2nd place in my age group so I was happy about that and I was happy for the bacon! 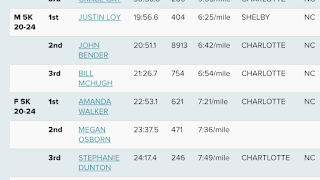 What's your reason to run? Do you put pressure on yourself?

I eat a lot of protein bars, probably more than I should! However, they are a convenient quick protein source that many people turn to. If you're one of those people, no doubt, you've heard of Quest bars. They had a big following, changed their recipe not too long ago, and some were not happy. They've also been coming out with a lot of new products and flavors. They even have a program you can apply for called Quest Labs where you have access to products not for sale to the general public yet. The Quest Labs community reviews it on a forum and then Quest may tweak the product and release it or choose not to. I've been a member and tried quite a few of the products. I actually tried all three new flavors before they hit shelves, but they're available to everyone now!

The blueberry muffin flavor is a favorite to many Quest customers. The aroma when you unwrap it is exactly like a blueberry muffin. It's dense and soft like most Quest bars. It has chunks of blueberries and what Quest refers to as "chewy cobbler inclusions". Whatever they are, they taste delicious. I really liked this bar but I like chocolate chunks more than muffins. XD
Oatmeal Chocolate Chip: 190cal 22c/8f/20p

This has to be my favorite of the three new flavors and possibly my favorite of all time. It is soft and chewy but not taffy-like. Most of the ones I've had, have had a generous amount of big chocolate chunks. The taste is like an oatmeal cookie, sweet but not too sweet, with a hint of cinnamon. I love this one!

The latest addition to the Quest line up is a chocolate based bar with almonds and white chunks. It got varying reviews in the Quest labs program but I believe they've tweaked the recipe. It has a nice chocolatey flavor as a base and sweet white chunks which look like white chocolate chunks but with a more marshmallow flavor. I'm glad they didn't go for a marshmallow texture. I really liked the crunch of the nuts as well. Overall, pretty good but not my favorite. For some reason, chocolate based bars never really wow me that much but if you like the brownie Quest bar, this is like the next level and it bakes into delicious rocky road cookies.
Overall, I've really enjoyed the new flavors and products that Quest has been releasing and I can't wait to see what they come up with next!

Do you supplement your diet with protein bars? What's your favorite? Have you tried the new Quest flavors? Let me know!