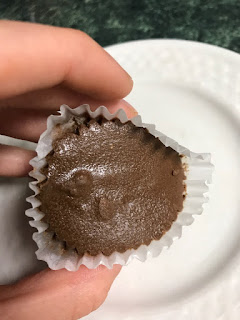 I think they meant extra benefits because tasting delicious is a benefit of chocolate already.

All jokes aside, ZenEvo knows that dark chocolate has great benefits, but they wanted to take that one step further by creating chocolate confections that can serve a purpose in your life. They first dreamed up a good tasting energy product and that was just the tip of the iceberg. They created the Energy Chocolate, Weight Loss Raspberry Chocolate, Dark Chocolate with Vitamin D, Protein Peanut Butter Cups, and Sleep White Chocolate. 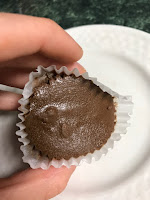 They were so kind to send me a few samples to try!

Have you had other protein peanut butter cups where the interior is some strange, chalky peanut flavored substance? I have. Safe to say, the bar was set low for this product. However, it greatly surprised me. The chocolate was smooth and creamy and rather than having a defined peanut butter center it was peanut buttery throughout and it's made with real peanut butter. It had some texture from the crunchy peanut butter. I really liked it! They make a perfect protein sweet treat!

Let me preface this with the fact that I am not trying to lose weight lol! I honestly did not know what this was - the packaging says "Fit". I want to be fit, right? So I tried it. And though the chocolate had a good, smooth texture, there was a very off-putting metallic flavor left behind. I was not a fan. Oops! If you're trying to lose weight, I would say maybe just choose a lower sugar/ sugar free option. 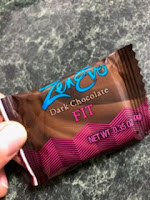 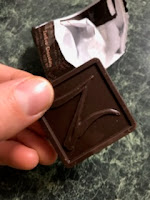 If I can supplement Vitamin D with chocolate, I'm down! This square had a slight aftertaste that I can't identify but not too bad. The texture is melt-in-your mouth smooth.

I haven't yet tried the Driving Energy chocolates (which contains 150mg caffeine, ashwaganda, maca and ginseng) or the Sleepy Sweet (white chocolate with melatonin) but they sound awesome and who doesn't love a sweet snack right before bed?
Overall, my favorite of their products that I tried was definitely the peanut butter cups! They are sweet, creamy and delicious with an added punch of protein. My least favorite was the "fit" squares as the aftertaste was off-putting to me.

ZenEvo uses French dark chocolate that is fair trade, non-GMO and kosher, they use no added sugars or artificial sweeteners and provide added benefits to help you reach your goals! Check them out here: https://zenevochocolate.com/

Which chocolate would you try first?

It's summer so everything is better frozen, right? 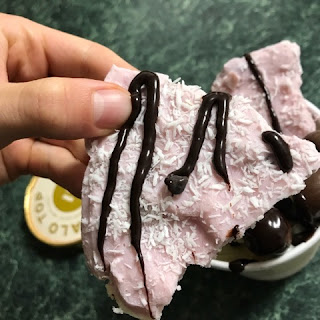 I originally saw a similar recipe on ChocZero's blog! I adapted it a bit to suit my fancy and it turned out delicious and refreshing - perfect for a hot, summer day!

I love how you can customize this! Think of the possibilities: caramel yogurt with caramel syrup with crushed peanuts, lemon yogurt with raspberry pieces, plain yogurt with maple syrup and walnut pieces, and the list goes on!

What kind of frozen yogurt bark would you make?

I love the ChocZero syrups for baking so I can have sweets without the sugar! You can check them out here: https://www.choczero.com/ and use code: "healthyhappyandfree" for a discount on your order!

Find the original recipe here: http://brookeziglernutrition.com/frozen-yogurt-berry-bark/
Posted by Megan at 3:32 PM No comments:

Hike of the Month - The Road to Nowhere, Bryson City, NC

Remember my hike of the month vow?

My mother and I vowed to do a new hike each month of 2018. We braved freezing temperatures in January and now we endure sweltering Carolina summer temperatures for July! It's worth it!

This month we chose a hike we have eyeballed in the past. Upon googling NC hikes, we often came across this "Road to Nowhere" that, as it turns out, actually goes somewhere! 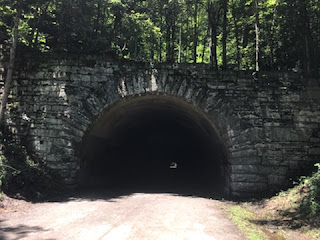 This road has quite an interesting story, too! The cliff notes version: Highway 288 was buried under Fontana Lake in the 1940's and the National Park Service promised to replace it with a scenic Lakeview Drive which would also serve to allow people to visit cemeteries. They constructed six miles of road into the Park ending at a tunnel and then construction stopped. They faced "environmental issues" eventually deemed to expensive to solve. So the road ended. The road to nowhere. However, just through the 1,200 foot tunnel, the pavement ends and a network of trails awaits.

There are a few different options you could take and we actually took the wrong trail and did a slightly longer than expected loop! Oops! That's what happens on new trails! 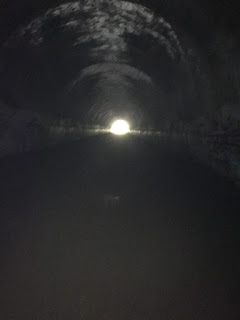 We went off the Lakeshore Trail, taking the first left onto the Tunnel Bypass trail which takes you past Campsite 67. At the intersection, we took the Goldmine Loop trail which brings you full circle back on the Lakeshore Trail where we headed back through the tunnel. I think this came to be somewhere around 4 miles.

Our plan was to take the second left catching the Goldmine loop to the other part of the Tunnel Bypass trail so it would've been around 3 miles and less uphill!
We had some steep inclines! Those workouts on the stair-master paid off. We had a slight view of Lake Fontana but otherwise, not too many spectacular sights. There was a small stream waterfall. I think the most exciting part of this hike is the long, dark tunnel along with the history! 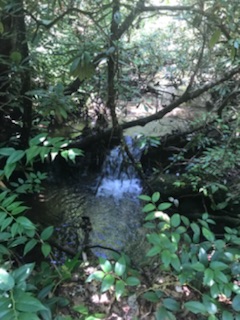 Do you get lost on hikes? What's your favorite thing to see in a hike? I like waterfalls!
Posted by Megan at 3:15 PM No comments:

Have you heard the term adaptogenic thrown around here and there?

Let's kick it up a millenial notch and add adaptogens to coconut butter.

I've tried Brain Butter and aside from being a beautiful blue hue, it tasted just like coconut butter to me, which is a good thing - I love coconut butter!

I also tried NP butter and it had a slight flavor to it which I can't identify, almost earthy, but not too offensive. I've never tried matcha so maybe that was the matcha flavor lol! I still loved it!

I haven't tried the others yet but I'm absolutely obsessed with how beautiful they are and the benefits of adaptogens can't be beat!

Which Pearl Butter would you try first? Have you tried coconut butter before?
Posted by Megan at 4:49 PM No comments:

Honestly, who isn't these days? It seems like stress is an epidemic, even among young people.

So what is the remedy?

Stop stressing! Well, that's easier said (err, typed) than done. So start small and take a few simple steps to reduce your stress! You may be amazed at the results from such initiating just these three simple steps.

Do you have any other tips to cope with stress?
Posted by Megan at 2:30 PM 2 comments: 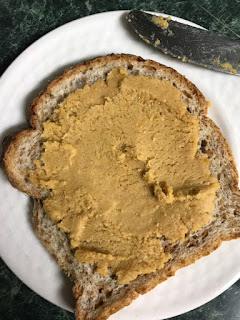 Who remembers the Big Comfy Couch? 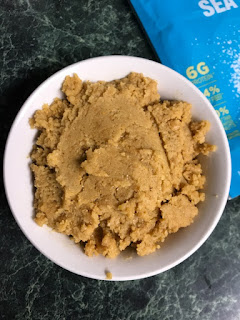 There was a character named Granny Garbanzo. She was quite a hoot. Little did I know, however, that Garbanzo was also the name of a bean AKA chickpeas. Little did I know that said beans could actually be quite tasty!

Now that I am older and have knowledge of the tastiness of garbanzo beans (chickpeas), I had a revelation: why not make it into a "butter". Every nut and seed you can think of is being made into butters so why stop there?

I took to my blender and got to butterin! Whether you have a nut allergy or just love to eat delicious things, you'll love this spread!

What you need:
Process:
Notes:
* You can purchase chickpeas already roasted such as Biena Snacks. These come in flavors so you could easily create a flavored butter or purchase the sea salt variety for a blank canvas.
*If you prefer to roast your own chickpeas, drain and rinse 2 cups chickpeas, mist with oil, add seasoning if desired, place in a cold oven. Cook at 425 degrees Fahrenheit for about 40 minutes, stirring every 10 minutes. Cool in the oven for one hour and then remove and cool completely before using them to make granny garbanzo butter. Method from theleangreenbean.com. For a faster option, try roasting them in an air fryer! I use this air fryer: 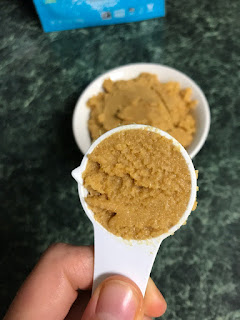 This butter is great for anyone with a peanut, tree nut, or seed allergy or anyone who likes delicious spreads! What butter do you think will come out next? Do you call chickpeas: chickpeas or garbanzo beans? Let me know!
Posted by Megan at 5:57 PM No comments:

Here are a few questions that I've gotten! Hope you enjoy!

All you need is one banana, one scoop protein powder (vegan doesn't work in my experience), and a tsp of xanthan gum. The full recipe is here: http://healthy-happy-and-free.blogspot.com/2016/04/protein-fluff.html

I use this Ninja:

I like that it has multiple blades. Of course I dream of a Vitamix, but this is way more affordable!

I follow MAPS programming which is from Mind Pump Media. I've listened to the Mind Pump podcast for a long time and I trust their programming. I've done MAPS Anabolic and I am currently doing MAPS Performance. Find all of their programs here: https://www.mindpumpmedia.com/

I also run 3-4 miles about 3 times a week, simply because I love it! I love to participate in 5k races as well!


Do you have any more questions? Drop 'em in the comments!

Do you eat ice cream by the pint-ful or am I an ice cream maniac? 😆

How do you milk a nut? 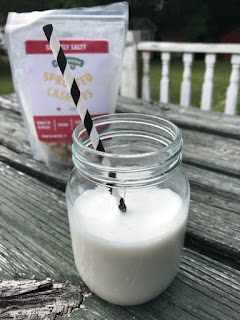 If you've ever looked at your carton of almond milk, you might have noticed a lot of ingredients there. Some can even cause people stomach upset or digestive issues. Whether that is the case or not, homemade nut milk is so easy and you can customize it to your preferences! So why waste your money on those store brands? 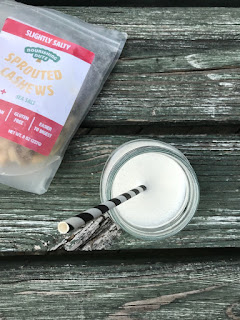 I first tried my Ellie's Best nut milk bag with cashews but you can use any nut you like! 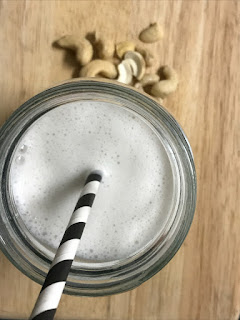 This homemade nut milk was so rich and creamy! Store bought milk doesn't even compare!

Ellie's Best nut milk bag is easy to use and clean, and it can also be used for making juice, homemade cream cheese, cold brew coffee and more! The discount code: happy , will save you on your Ellie's best bag. They are bigger than ordinary nut milk bags so they are easy to use! They also have kits with multiple bags, pitchers, etc. Find it all here: https://elliesbest.com/

What nut would you milk first?

Every year I say: "This summer is gonna be the best summer."

Every year, I'm sad to see summer go. I feel like I've missed opportunities and not fully embraced all the fun of summer! I think it's healthy to find our inner child and fill our summer with fun, relaxing things, even if I do have to wake up and adult in the morning lol!

So to make the most of this summer, I'm compiling a summer bucket list! 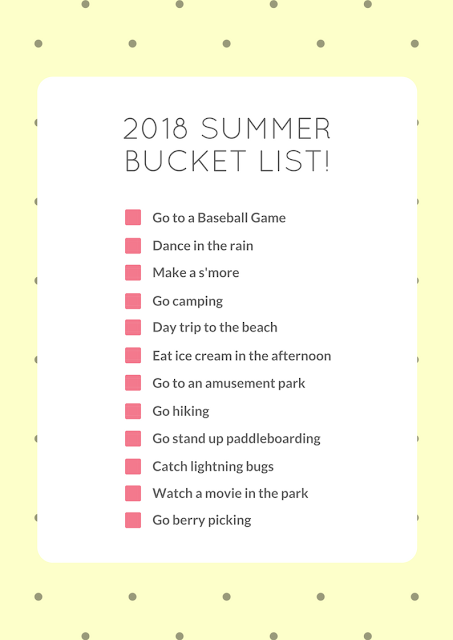 Let's take advantage of the extra daylight and remember how to let loose and have fun! Who's with me? What's on your summer bucket  list? Have you already accomplished something on it?
Posted by Megan at 2:45 PM No comments: